JCRC-NY’s Missions to Israel program, which has been on-going for over two decades, has included among its participants over 500 elected and appointed public officials, ethnic and faith leaders, human services agency professionals, business and union leaders and journalists.

The Missions’ itineraries provide participants with first-hand knowledge and experiences of the complex reality of the State of Israel. The participants are able to then convey to other New Yorkers the challenges Israel faces as it seeks to achieve a lasting peace with its neighbors. "Our journey brought us to pray at the Great Western Wall while I also reflected on my faith as we walked the path of Jesus. My heart sang as we traveled from Bethlehem to the Sea of Galilee and finally to the glorious history contained within the Old City at Jerusalem. One of the most lasting yet haunting memories I will take with me was our visit to the Yad Vashem Holocaust Remembrance Center. The history of the atrocities committed upon the Jewish people during the Holocaust must be preserved for future generations, so that it will never be forgotten. As you leave the memorial, there is an undeniable grief and understanding that overwhelms you, yet there is hope for the future as seen in the face and life of every Israeli family."

"I was amazed at the technological advancements driven by Israeli entrepreneurs and start-ups, fueling an economic boom in the region. Secondly, our visits to historic and religious sites like Masada, Nazareth, the Galilee, the Old City of Jerusalem and others were spiritually enlightening and fulfilling. Our visit to the Yad Vashem Holocaust Memorial was a painful and necessary reminder of the incredible journey of the Jewish people from statelessness to statehood, and the suffering, discrimination, and violence incurred by the Jewish people even in the recent past." 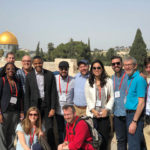 “Perhaps the most moving experience for me happened in Jerusalem, the home of the Western Wall, the Church of the Holy Sepulcher, and The Dome of the Rock. It is a place where the hope of religious coexistence triumphs. I shared many special moments with the leaders on the trip. Our bond transcended from collegial to spiritual while we wept in front of the Western Wall. These experiences fostered a strong spiritual connection to the land.”

The deep relationship between New York State and the State of Israel has a long history. As the American state with the largest Jewish population, there is great interest and concern in New York regarding developments which impact on Israel’s safety, security and viability. In addition, New York’s very diverse population makes Israel central to not only the Jewish faith, but also to Christianity and Islam. Further, there are active commercial ties between New York and Israel in a wide range of industries. Indeed, the green light recently given to the Cornell-Technion Tech Campus on Roosevelt Island highlights the growing academic ties between New York and the State of Israel.